No allies, no army, no tower defense. Just you, your laser, and an unwelcoming planet. Welcome to 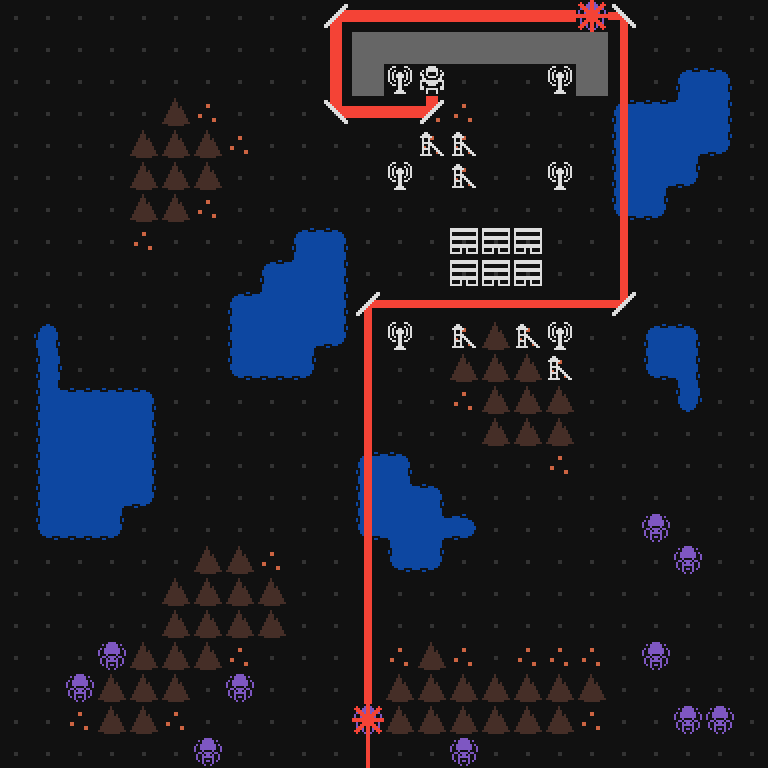 Reflector: Laser Defense is a turn-based hybrid roguelike base-builder where you control an individual in charge of managing and defending a colony on a hostile alien world. The only unit you directly control is yourself.

You are equipped with a laser gun that has infinite range, but can only shoot in the four cardinal directions. To overcome this limitation, you can place reflectors (which reflect the beam 90 degress) and build splitters (which splits the beam into two weaker beams). Each beam has limited power, which is decreased every time it hits something or is split.

Reflectors are free and instant to place, but need to be within range of a projector. Your suit has a built in projector, but for more flexibility you can build additional projectors. If a reflector is ever outside of range, either because you moved or a projector got destroyed, it is immediately removed.

Enemy bugs will come at night. There is currently only one type of enemy (a drone) which simply moves towards and attacks the nearest building or yourself. You, enemies, and buildings all have only 1 health and are destroyed in a single hit. The one exception to this are walls, which can take 2 hits.

There a four types of terrain: ground; mountains which are impassable and indestructible; water which is impassable but you can shoot over it; and ore, which can be mined for metal.

To build, you need metal. This can be either mined manually when standing next to ore, or it can be automatically extracted by building a mine on ore. You start with one mine already built.

You start with one colonist in a temporary tent. Your population will grow on it's own and place new tents close to your existing buildings. You can build residences, which house up to three colonists, to control where they live.

Every time a colonist dies, your colony loses one morale, and if morale reaches zero, you lose. There is currently no way to recover morale. You also lose if your entire population reaches zero, but usually you will lose to morale before that happens.

To win, grow you population to 30.

This game started as Reflector RL, an entry for the 2019 7DRL game jam. The jam entry shares the laser reflecting and splitting mechanics but not much more. There was no base-building or management aspects to Reflector RL, which was instead more of a traditional dungeon dive. The 7DRL submission is available here for the curious.